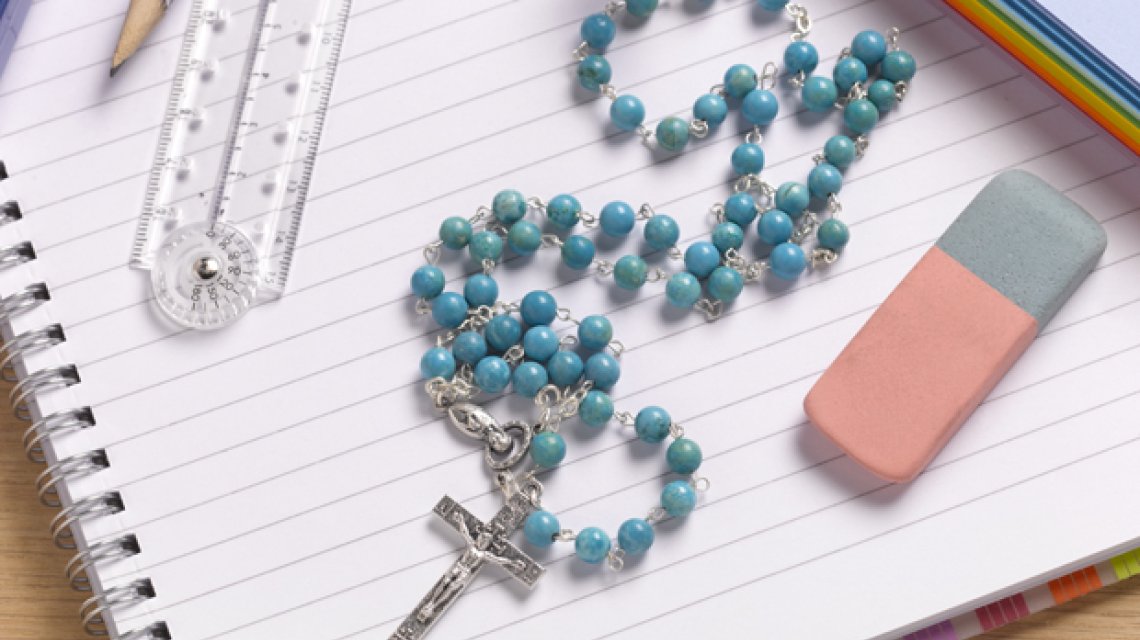 It's unpleasant enough that any institution would turn away a child on the basis of their parents' beliefs. When it's a state-funded school, it's outrageous. But that's precisely what many faith schools can do ­– and the Roman Catholic Church wants more power to do.

The Catholic Church, and some other religious institutions, want to see the 50% cap on children admitted on religious grounds to faith schools abolished. If they are successful, it will mean we all pay for schools that the majority of our children cannot go to, unless we're prepared to literally bend the knee, get our children baptised and send them to church like a good Catholic. The words 'apartheid,' 'discrimination' and 'forced conversion' spring to mind. Words that should be confined to the darker parts of our nation's history.

The Church knows that its demands are ugly. That's why it needs to dress its desire for 100% religiously selective schools in a cloak of myths and misinterpretations.

Myth #1: 'The cap means faith schools are forced to discriminate against families of that faith'

This might be a compelling argument – if it were true. But this isn't how the cap works. All it means is that once the school has accepted its 50% of children on the basis of their religion, the factors for accepting the other 50% must not include religion at all; they must be admitted on other criteria, such as their distance from the school (much the same criteria as any non-faith school). So children from Catholic families who meet these criteria can still be accepted after the 50% faith-based cap is met, provided they meet these criteria.

Not a single student would be turned away from a Catholic state school with the 50% cap because they are Catholic. The Church knows this.

Any faith school operating under the belief that they are compelled to turn away families because they share the faith of the school once they've reached the 50% cap is acting in error.

Myth #2: 'We have to scrap the cap because it goes against Canon law'

The next argument from those opposed to the cap is the idea that any system that could result in any child being given preference over a child from a Catholic family, even if it's simply because the former child lives closer to the school than the latter, is against 'Canon law'.

If that really is the case, why are so many Catholic schools operating in countries without discrimination in admissions? Evidently, Catholic authorities in other countries have found a way of making Canon teachings compatible with wider society.

And as a nation, we shouldn't even be considering religious 'laws' in deciding admissions policies. If it were Sharia law, and not Canon law, that had been cited as a reason for scrapping the cap, I wonder what kind of response that would have provoked. There is only one law we need to consider, and that's the law of the land that our elected representatives vote on.

It's therefore rather disappointing (if not surprising) to see Jacob Rees-Mogg citing Canon law as a reason for opposing the cap. Rees-Mogg won a great number of people over in the run-up to the EU referendum on arguments regarding the nature of democracy and the sovereignty of British parliament in law-making. Why does he therefore argue that religious law should be a consideration when it comes to rules governing our children's education?

The Catholic Church insists that it is unable to open new schools because of the cap. Not true. Nothing about the cap prevents Catholic, or any other religious schools from opening. Last year alone, over 250 new state faith schools opened.

The truth is that the Catholic Church itself refuses to open any schools because they only want schools where they can discriminate in admissions when over-subscribed. The Church has never even tried to make the cap work. That's why the government has proposed scrapping the cap in the first place: to appease the Catholic Church. That our government should allow itself to be manipulated by a religious institution should be a serious concern in itself, to say the least.

Myth #4: 'We need to scrap the cap to satisfy demand'

There's an idea that faith schools are desirable because children do better in them. Therefore, oppositions to the cap say, we need to give in to the Catholic Church's demand to abolish the cap so that they will go ahead and create more Catholic schools.

But the Education Policy Institute found in 2016 that scrapping the cap will not improve standards in any way. Analysis in the report, which looked at the results of pupils at all schools in England, found faith schools took a lower proportion of the poorest pupils. It also found such schools had a higher proportion of children with high prior attainment. Once this high prior attainment had been taken into account, faith schools performed little or no better than non-faith schools at primary level.

And finally, the general public — including Catholics themselves — have said they don't want to scrap the cap. 80% of the population, and 67% of Catholics, said they wanted the 50% cap retained.

So there you are. It isn't actually Catholics themselves who approve of giving schools greater freedom to discriminate. It's just the institutions that claim to speak for them. Perhaps the churches should start listening to the congregation, and perhaps the government should listen less to the churches.

Megan Manson is a campaigns officer at the National Secular Society, where this opinion piece was first posted.