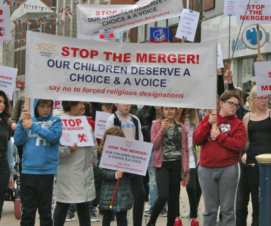 Megan Manson on how parents are fighting back against religious favoritism/proselytizing and systemic bias against secular schooling.

In November, the National Secular Society got a call from a parent whose daughter was being forced to pray against her wishes.

The girl, who attends a non-religious primary school, was told that she must bow her head during prayers held in an assembly by an external evangelical group that comes to the school to tell Bible stories. She was happy to attend the assemblies with her peers, and to sit quietly and listen attentively, but her strongly-held atheist worldview meant that she did not wish to participate in the act of worship. The school argued with the parent that the pupil should bow her head in order to 'conform' with the other pupils, and as a sign of 'respect'.

This case is testament to a battle being waged in Britain's education system. On the one side are families, community members and (often) class teachers who just want to see pupils get a good education without religion sticking its nose in. On the other side are headteachers, government representatives, academy chains and religious institutions who want to assert their authority and their particular ideology on school communities. In this battle, it's clear to see who is David and who is Goliath.

More high-profile cases of parents speaking out against school evangelism have come to light in recent times. In October, parents in Tunbridge Wells mobilised against CrossTeach, an evangelical group who had reportedly been telling pupils that "men can't marry men" and that if they did not believe in God "they would not go to a good place when they died". Working together, the parents raised their complaints with their school, with some taking the step of withdrawing their children from CrossTeach assemblies.

The school in question, St John's Church of England Primary School, is an Anglican faith school. But one of the parents pointed out: "In Tunbridge Wells the vast majority of primary schools are affiliated with the Church so it's not like you have a choice whether you expose your children to this."

In this case David fortunately triumphed over Goliath. As a result of the complaints, the school decided to cease inviting CrossTeach to lead assemblies or take lessons – but not without a great deal of indignant foot-stamping. Headteacher Dan Turvey told Kent Livethat he did not believe the parents' concerns "have any real substance" and their decision to exercise their right to withdraw their children from CrossTeach assemblies "made the situation unmanageable and a distraction".

The local church also saw fit to howl disdain and disgust at the parents and their dissent. Rev Giles Walter, who had been taking assemblies at St John's Church of England Primary School, accused the parents of being "extremist", saying: "The behaviour of this small group of parents has hurled a hand grenade into a previously happy and harmonious environment. They seem determined to drive mainstream Christian teaching out of our church school: and it is they and not ourselves who should be charged with extremism and non-inclusiveness."

Far from David throwing a rock, the Church portrays upstart parents as extremists hurling hand grenades. In common with bullies everywhere, it paints its victims as the villains.

The truth is that more often than not, the Church wins. Back in 2009, parents and governors at Ladymead Community School in Somerset petitioned against a proposed merger with the St Augustine of Canterbury School. The primary cause of contention was that the new school resulting from the merger, the Taunton Academy, would be a Church of England faith school. Ladymead governor Chairman Nick Evelyn said in the Somerset County Gazette: "Many parents chose to send their children to Ladymead and now fear for their education. They don't want a faith secondary schooling for their children or they'd have sent them to St Augustine's, which is a church school." A survey was held at a consultation meeting for the proposal, which showed 100% opposition.

But the pleas from parents, governors and school staff at Ladymead went unheeded, and the merger went ahead in 2010 with the support of the St Augustine headteacher and Taunton MP Jeremy Browne. Perhaps they regret not listening to the parents now. In its last Ofsted inspection this January, the Taunton Academy was rated 'inadequate'.

The combined might of church and state, and its awesome power to crush the right of ordinary families to freedom from religion, revealed itself more recently in a similar case of a school merger. In October, parents and children of Trafalgar College were stirred into action when they discovered that as a result of a merger with Great Yarmouth Charter Academy, the College would lose its religious neutrality and become a Christian school. The families were so opposed to this move, and so frustrated that their concerns were not being listened to, that they took to the streets in protest. Their banners, which bore slogans such as "Say no to forced religious designations" and "Our children deserve a choice & a voice", said it all.

But all to no avail. It turns out that the merger had been agreed months before a public consultation was held. The academy chain behind the merger, Inspiration Trust, didn't even give families the chance to fight back.

This underhand method of giving parents the illusion of choice and control when in fact that choice is being ripped away from them is the latest weapon in the faith schools' arsenal: stealth tactics. It seems that education and religious authorities are aware that families are increasingly rejecting the very concept of faith schools, and are doing their utmost to sneak in religion through the back door. Mergers of faith and non-faith schools are one way to do it; another way is to exploit the academy and free school system.

As the NSS reported in 2015, academies and free schools can be designated as 'religious ethos' without adopting a formal 'religious character', blurring the line between what is and what is not a religious school. There are even academies that clearly operate under a faith ethos, but are not registered as such with the Department for Education. The NSS investigation into Oasis Academies revealed the extent of the problem. Although less than a quarter of Oasis Academies are registered as having a religious character or ethos, every single one of them says that their ethos is "inspired by the life, message and example of Jesus Christ" and that they are "schools of religious character" on their websites.

Every school that has been converted into an Oasis Academy was previously non-religious. That's approximately 40 new faith schools which have sprung up to effectively replace secular schools within the last decade. And thanks to the Christian nature of these schools being omitted from DfE data, they have emerged with little notice.

But with the UK becoming more irreligious and religiously diverse, how long can the church's sneaky bully-boy tactics prevail? The public is rightly getting tired of being told what to do by religious institutions, and fed up with the encroachment of religion into their family lives. Thanks to rapidly-improving social media and other internet technology, parents are finding it easier than ever before to communicate with each other and organise themselves to resist religion. And in the long run, religious institutions would be foolish to ignore their increasingly louder, bolder voices. For if anyone knows what happens at the end of the story of David and Goliath, it's the Church.

Megan Manson is a campaigns officer at the National Secular Society, where this opinion piece was first posted.