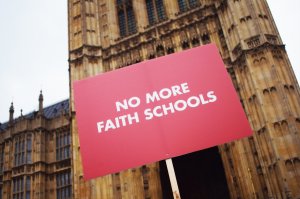 As an experienced teacher of children under 11 around the world, I have witnessed many examples of how religion can cause problems at school. Preconceived and unchallenged ideas about the world and our place in it mean that when children meet someone whose own world view is different, arguments ensue. The counter to this is the provision of well balanced and objective religious education in a secular school system. Without this learning opportunity, children can find themselves in conflict with their peers over issues that they do not fully understand or comprehend.

A prime example of this for me was a disagreement between two of my former pupils – one Christian, one Hindu. When I say that was their religion, what I actually mean is that their parents had told them that is what they are. They were seven years old, far too young to understand the implications of their 'choice' of faith.

The argument erupted in the library when the 'Christian' corrected the 'Hindu' over his belief that there is more than one God. At first, I encouraged the debate as it was a good opportunity for them to see a different viewpoint. However, it soon became clear that, faced with an alternative idea and no understanding of why something their parents had told them was being challenged, the only option was to raise their voices ever higher.

Allowing myself a moment to recognise the parallels of real life in this microcosm of theological debate, I plunged in and stunned them into silence by revealing that some people believe there are no gods at all. The expressions on their faces was something to behold as they quickly became reconciled with one another and unified against this altogether more bewildering and vaguely threatening suggestion.

This episode took place in China, a state which explicitly forbids its foreign teachers from educating its children about religion in any form. Whilst this prevents the promotion of a single religion in schools, it does not allow discussion about the many different points of view on religion around the world – a clear hindrance to children's education and their understanding of society. My intervention could conceivably be considered to be in contravention to this law, but I could not allow such a ridiculous argument to continue. No teacher should allow such ignorance to remain unimpeded.

Now imagine if these children attended faith schools as well. Both at home and at school they would be told that their worldview is the only acceptable one and their ignorance of alternative views and beliefs would continue unchallenged.

I see it as my duty to swim against the tide of popular religious ideology and let my pupils see that other views do exist, even if they currently cannot understand or agree with them. This is especially important set against the remarkably high number of schools that make a particular religion the central pillar of their identity. That's why I would never condone the existence of faith schools by working in one.

By only working in secular schools, I am free to broaden the understanding of my charges without prejudice towards any group of believers or non-believers. The increasing concern over the years since the introduction of free schools is that secular schools are an endangered species and publicly funded faith schools are becoming the chief influence in the lives of ever-growing numbers of school children. It should be a national outrage that religious organisations can fund their own indoctrination camps with money from the treasury.

Allowing state funded faith schools means religious propaganda is not only tolerated but is sponsored by taxpayers' money. Taking only Christian schools into account and considering that roughly a quarter of the UK population are declared atheists and 40% (including atheists) of the population are not Christian (according to the 2011 Census), nearly half the country are funding schools which push an agenda that runs counter to their beliefs. This figure rises to well over 85% when considering any other type of publicly funded faith school. More recent surveys suggest the figure of non-believers in the UK is even higher: 53% of Brits have no religion, according to the 2017 British Social Attitudes Survey.

Not only is there a clear moral objection to faith schools but funding them goes against the UK's democratic principles. Parents, as guardians, have every right to raise their children within a religious tradition but the state has an obligation to ensure that they receive a balanced religious education at school.

Robert Bradley is an international primary school teacher in Bangkok. He has previously worked in China and Newcastle upon Tyne. The views expressed in opinion pieces are those of the author and may not necisarily represent those of the NSS or affiliated campaigns.