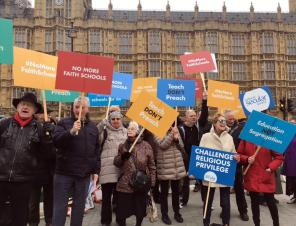 It's high time for parents to demand an end to religious groups' control of children's education, says Simon from West Yorkshire.

I welcome the National Secular Society's No More Faith Schools campaign. This is very much overdue. As someone who attended a voluntary controlled Church of England faith school as a child and as a parent of children who did the same, I've seen first-hand that even the most 'moderate' of faith schools are failing at inclusivity and promoting dogma which can undermine development of critical thinking skills.

As parents who hold no religious beliefs, sending our children to the local CofE primary was only undertaken having sought reassurance from the headteacher around inclusivity in the school for pupils who were being raised as freethinkers. It was the nearest primary school to us and also the one I had attended as a child, but the visibility of church influence seemed more overt than I remembered. This was why we asked specifically about inclusion. Sadly after the decision was made and time went on, the reassurances were slowly revealed to be empty promises.

Imagine every day at school having to take part in activities that didn't make sense within your worldview. While I suspect most parents' memories of school assemblies include hymns and prayers, the tone has changed in the intervening years. Collective worship is the term used in the law and readily adopted within Church of England faith schools. Being asked to worship a god, ask for forgiveness, mercy, or give thanks - when minutes later a teacher is telling you that you have to take responsibility for your own actions - is surely no way to provide clarity of guidance to a child still working out right from wrong.

The 'right to withdraw' is often quoted by apologists but that's a parents right, not the child's. Assuming you take that decision for your child, you do so knowing that they could then miss out on class run assemblies and celebration assemblies. Children have enough challenges trying to fit in without putting themselves in the spotlight for an unwillingness to submit to the insidious indoctrination that pervades at regular intervals through the school calendar.

At the age of six my daughter came home and described how in school they had been learning the difference between supplicant and intercessory prayers. At a community school I wouldn't have expected that to have been covered until GCSE Religious Education.

Over the course of our children's time at the school we had several meetings with staff at the school. We discussed collective worship, faith-based activities and RE curriculum delivery with the class teacher and headteacher (and in at least one instance the local vicar sat in on the meeting). We never achieved a satisfactory resolution to the issues we raised. Even being a parent governor for 4 years didn't help effect any change.

We talked over the issues at length with our children. It's an unenviable choice for a child to be given (which is maybe why parents have to be the ones to make the request); stand up for your principles and potentially be ostracised by your classmates or submit yourself to a daily dose of religious indoctrination. Our daughter chose not to put herself in the position of "outsider". Our son, more self-confident, was happy for us to withdraw him from collective worship and subsequent faith based activities such as 'Rewind to Easter'. It was a decision that empowered our son, but I am all too aware that very few children are given this choice to make for themselves. And that's no reflection on parents, only on the lack of transparency of what goes on behind school doors.

I think it is unavoidable when schools are controlled by faith-based institutions that the integrity of the curriculum delivery is serious compromised. Teaching from a default position of faith completely undermines any inclusivity provisions. It is all too easy for a teacher to slip into language such as "We as Christians believe…", "At this school, as Christians, we…." This happens – my children have experienced it first-hand.

When asked questions by naturally inquiring minds, there often ends up with a blurring of lines between what a teacher responds with as facts, and beliefs adopted by them or the school.

Additionally, children can be exposed to non-school staff from religious organisations. Vested interests often evangelise a non-fact based agenda when whole-class activities such as writing prayers or trips to things such as 'Bible Times Exhibitions' are organised.

Since the 1992 publication of 'The Way Ahead' by the Church of England, links between local churches and schools have been deepened as schools are effectively used as a source of fresh recruits to bolster ever decreasing congregations. Successive governments have failed to heed the countless reports from organisations such as the Accord Coalition and the National Secular Society that faith-based schools do nothing to improve community cohesion and pupil inclusivity in and increasingly diverse and secular population.

It's high time that parents were made aware of what goes on in schools around the country. But more importantly, they should join the NSS in demanding government action to remove this damaging and divisive influence on our children's education once and for all.