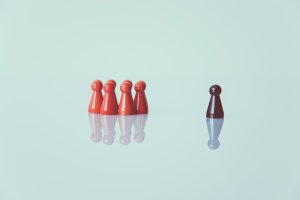 When families are assigned faith schools they don't want, left with no choice or locked out of local schools, the effect can be alienating and excluding, as this parent shares.

Our son, who is autistic, has an Education and Health Care Plan (EHCP) and until recently, we faced a difficult situation – all mainstream secondary schools but one said they could not meet his complex needs. A local Catholic school offered him a place and our local authority named it on his EHCP despite our protestations. It can be hard enough for any family navigating the complexity of school choice, but for those with additional needs, options are even more limited. The effect of basing specialist provision in exclusive faith schools is rarely considered.

When our son looked at the material the school posted on its website, he became confused and anxious. When we discussed this, he clearly communicated that he did not share the school's belief that he was created in the image of a god, nor did he believe a god had called him to be 'the best person' he could be. He doesn't think this has any bearing on how confident or mature he has the potential to grow.

It is not in the interest of an atheist child to use a 'Jesuit Pupil Profile' to build his character. It seems rather strange this would even be attempted in an educational system which claims to be child centred. He believes that neither his living, nor learning, has any connection to the glory of any god. His life and lifestyle are not faith filled, and he does not hold religious beliefs. He does not "find God in all things".

The Catholic 'focus point of school life', which he found disturbing and unsettling to his identity, is not in line with his worldview. He would feel alienated amongst a community who believe so differently and have created a world around them to reflect that – which does nothing in his case but further highlight that he is different.

While he has historical and cultural interest in all human activities, he would not be 'living Catholic values and virtues from the gospel in his daily life'.

As parents, we felt paralysed.

We do not wish our school to nurture our son 'towards human wholeness within a Christian community'. We have promoted human wholeness encompassing a fusion of all human activity and cultural experience, and he has shown early on a desire to move towards non-faith-based disciplines, and away from anything religion-based.

As individuals, we learned early in life that exclusively faith-based environments can promote biased learning. And historically Catholic institutions have not proven secure for many children, ourselves included – we have experienced abuse in the hands of clergy, the reason I left my country of birth.

It filled us with concern that the school's foundation is exclusively Catholic, and that it dictates what the school teaches. We were worried that 'collective worship where all are included' may have meant our child would potentially be forced to attend religious activities and worship – for him mass is neither the source, nor the summit, of any faith.

At the same time, we want him to build a sense of belonging which does not require a high level of cognitive dissonance or autistic masking. We want him to feel included in all areas of school life without paying such a high price for the privilege. Copying the majority culture would not take away his minority status; it would merely make him more palatable to those with power over his life.

Our child does not wish to be a pupil at a Catholic institution. We do not think our child would be a good fit for a Catholic school even without his complex special educational needs.

It is galling that if he didn't have these needs, we would likely not have faced a prospect of our lovely boy being forced into a setting so alien to him. But many families like ours have little choice but a faith school.

We are lucky. Following a tribunal, he now has a place in a special school with a secular, community ethos. The process of getting here has been traumatic.

For a long time, we felt our son's disability had limited his chances of education in line with his wishes and beliefs – and caused the whole family a lot of distress as a result.

For our autistic child, the school's Catholic ethos would have been yet another barrier to struggle with, an unnecessary bridge too far, and one which he would not have been able to overcome via reasonable adjustments as the school's fabric is immersed in it.