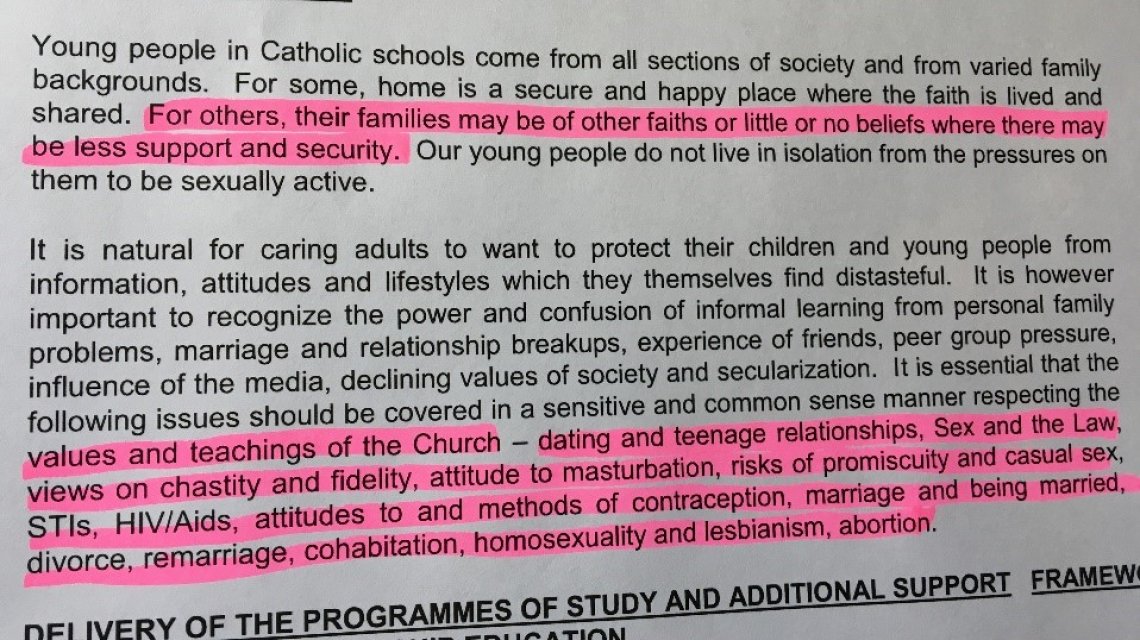 Parents are being forced to send their children to a Catholic school that belittles non-Catholic families in its official policy and teaches sex and relationships issues through a religious lens.

The town of Glossop has been left without a non-religious secondary school after a local community school, Glossopdale School, relocated to the nearby town of Hadfield last year.

Almost 40 children from feeder schools traditionally linked to Glossopdale School have failed to get a place there, due to the 'nearest first' prioritisation system for school places.

They are instead being allocated to St Philip Howard Catholic Voluntary Academy or New Mills School, a community school eight miles from Glossop.

St Philip Howard's sex and relationships education policy says: "Young people in Catholic schools come from all sections of society and from varied family backgrounds. For some, home is a secure and happy place where the faith is lived and shared.

"For others, their families may be of other faiths or little or no beliefs where there may be less support and security."

The policy says it is "natural" for adults to want to "protect" their children from "attitudes and lifestyles which they themselves might find distasteful".

It also says that "declining values of society" and "secularisation" cause "confusion".

National Secular Society chief executive Stephen Evans said: "It is outrageous that parents are being forced to send their children to a Catholic school that expresses such an unwelcoming and disparaging attitude towards families of other faiths and no faith. No doubt many parents will also be concerned the school is substituting broad, balanced and objective relationships and sex education with Catholic doctrine.

"It's often claimed that faith schools give parents greater choice. But this incident demonstrates that faith schools result in many parents having no choice but to have their children educated according to the teachings of a particular religion.

"All state schools should be welcoming to families of all faiths and none. No child should be forced to go to a school that treats them unequally, or distorts sex education through religious teachings."

St Philip Howard was featured in an NSS report on relationships & sex education (RSE) at faith schools last April. The report, Unsafe Sex Education, revealed that 77% of secondary faith schools with an RSE policy were distorting sex education by teaching it according to the tenets of their faith.

Another NSS report published last year, The Choice Delusion, found that the provision of state-funded faith schools in England restricts genuine choice for parents because many have to send children to faith schools against their wishes.

The NSS found that more than one in five families who missed out on their first choice of a non-faith primary school in September 2018 were assigned a faith school. This includes 1,398 people who had made all their preferences for a non-faith school.

Local parent Gareth Wilson, whose son lost out on a place at Glossopdale School, has launched a petition calling on the council to address the issue. It says: "2019 school admissions reveal Derbyshire County Council has effectively cut Glossop from the catchment area for the so-called 'Glossopdale School' through incompetent planning.

"Glossop children are left with a choice of a faith-based school or an eight mile journey to New Mills."

Local MP Ruth George has written to the council to express her concerns.

She said: "Lots of parents in Glossop have contacted me, very upset that their child has not been allocated a place at Glossopdale School, in spite of their being in the catchment area.

"Some have been allocated to St Philip Howard when it was a lower choice of school for them, or not on their list as they do not wish to attend a faith school. Others have been assigned to New Mills School, which involves considerable travelling."

The NSS has written to Ruth George to inform her of the contents of St Philip Howard's sex and relationships education policy.