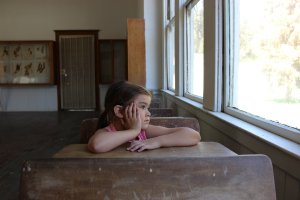 Until I was 14 years old I attended staunchly Catholic primary and secondary schools in a rural ex-mining town in County Durham. My parents were under the (woefully wrong) assumption that religious schools performed overwhelmingly better than their rivals academically. So aged four, I was sent to a faith school where my impressionable head was filled with the idea that if I was ever 'naughty', I would be sent to burn in hellfire for eternity.

We would cultishly chant our prayers five times every day (of course not understanding their meaning) and attend church weekly, come rain or shine. I remember arriving in church soaked through and shivering, feeling bitter that our trips to the local swimming pool were cancelled on even the slightest of overcast days.

Other than being a huge waste of time, these activities brainwashed the malleable minds of young students with a deep sense of guilt. This guilt was further extracted from us when we were sent to confession. The priest would feverishly attempt to pry details of our supposed 'sins' from us and we'd end up confessing to invented tales of killing wasps or kicking classmates, just so we'd have something to talk about.

However, the worst and most damaging part of attending a Catholic school was the institutionalised homophobia. I remember seeing two of my friends stride into the classroom linking arms in our final year of primary school and hearing the horrified yells of our teacher, accusing them of looking 'like lesbians'. When a 10-year-old child is berated for simply walking arm-in-arm with her friend, what message does this ingrain in her mind?

When I moved up into the secondary school, in every religious education lesson, casual homophobia would slip out from the mouth of the very person who should have been encouraging and nurturing her students. My teacher would tell the class that she would be disgusted if her child was gay and would immediately disown him and throw him out of his home. My mum begged me to allow her to complain to the school when I relayed this to her, but naively and grossly overestimating a teacher's influence, I cried in fear and begged her not to.

Another shocking instance came when the headmaster of the school called my dad, a general practitioner, and asked if he could talk to a gay student and provide him with a medical reason why being gay was wrong. My dad obviously declined. Yet, the most famous example of homophobia at this school occurred once I had already left. A boy in my year became the subject of the BBC Three documentary 'Jamie Drag Queen at 16'.

In the show, Jamie was told by the adults at this school that he was not allowed to wear a dress to prom. When he bravely arrived wearing this dress regardless, the teachers attempted to stop him from entering. Their excuses varied from their insistence that they didn't want all the attention to be on Jamie, to not wanting to upset the parents of other students who were 'disgusted' by his choice of outfit. Luckily, Jamie was celebrated by his peers and his story is now the subject of the successful West End Production 'Everybody's Talking About Jamie' - a fact I hope seriously irks all the teachers who mistreated him.

No child should be made to feel that their sexuality, gender identity or self-expression is reprehensible. Kids should never be made to live in fear that their supposed 'wickedness' (otherwise known as being a human being) will damn them to everlasting torture.

After experiencing the downfalls of faith schools first-hand, I strongly believe that children should not be taught religion as fact but instead be encouraged to think independently and critically about the world around them. We should all have the chance to grow up free from indoctrination and shame in a place of learning while not being segregated from other faiths or non-believers.

Image by Cole Stivers from Pixabay