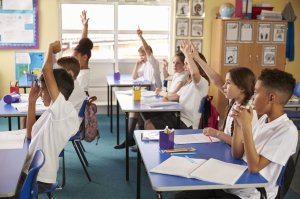 While faith based inspections of state schools continue, headteachers will continue to play a game which gives the church undue influence in our schools, says Matthew from Hampshire.

About 15 years ago I became the headteacher of a Church of England primary school on the south coast. During my headship I realised that publicly-funded religious inspections gave the Church of England an opportunity to maintain its power over thousands of state-funded schools.

These inspections are known as Statutory Inspections of Anglican and Methodist Schools (SIAMS). The National Secular Society recently called for them to be scrapped, arguing that they were inappropriate.

Leaders of church schools are often told that a poor SIAMS inspection can trigger an Ofsted inspection. They also enable the church to make schools adopt a much more overtly Christian nature and curriculum. Schools are expected to hold a distinctively Christian vision and have to prove how well they work with the local church and diocese, which can mean it's very difficult to say no to the latest evangelical programme the church is running.

To do well in a SIAMS inspection, a headteacher must prove that both pupils and adults in the school are "the person God created you to be". The inspection schedule talks about "God's children" and I had to give all pupils and adults the chance to "grow spiritually through experiences of prayer". To accommodate this in a way which was appropriate for the varied demographic of the children in my school, I aligned personal reflection and prayer, but this was challenged by the inspector. The assumption is that the headteacher believes in and worships an Anglican God.

I also had to prove that all of the children and adults understood "the varied liturgical traditions of the Anglican faith", the "trinitarian nature of God" and the "central importance of the Eucharist/Communion to Christian worship". We were a village school serving a majority non-Christian catchment. A survey had indicated that, of the respondents, there were only three families at the school who attended church on a regular basis. I argued that this type of theological teaching was inappropriate for our school community. However, I was told that this was exactly what a Church of England school should be teaching its pupils.

As a nationally designated specialist leader of education, I also visited many church schools in a consultant role. The SIAMS inspection pushes many headteachers to implement more visibly Christian characteristics. The run up to an inspection often begins over a year before the date, and as the year progresses, schools often become more and more overtly Christian in nature as headteachers try to prepare the ground and impress the church inspectors.

The SIAMS process normalises and encourages evangelism, explicitly Christian teaching and creationism. I have seen a non-Christian headteacher give a creationist assembly and adopt numerous elements of traditional Anglican doctrine due to an upcoming SIAMS inspection. Many schools start to use the liturgical calendar and associated colours within collective worship and in wider school life.

The SIAMS schedule states that: "If leaders, including governors, cannot articulate how biblical teaching roots the school's vision, giving it coherence, relevance and sustainability the school could not be good."

In my experience this often manifests itself in giving rise to collective worship which presents Adam and Eve as fact, Noah's Ark as fact, the miracles of Jesus as fact.

I have listened to an infant assembly where the teacher told the children: "Rain is caused by God crying when he is sad." Educationally harmful material finds its way into collective worship – particularly when given tacit approval by the headteacher. When time-pressured teachers look for online Biblical resources for lessons or assemblies, they will often find and use strongly evangelical material without checking its suitability or provenance.

The SIAMS inspection schedule encourages governing bodies to employ Christian headteachers and not necessarily the best candidates. It promotes indoctrination of young children. It can promote a culture where children and adults feel afraid to say they are agnostic or atheist. It can encourage Christians in governing bodies, headteachers and the local church to push their own evangelical agenda within schools.

The cognitive dissonance I felt in leading a church school proved a key reason in my eventually leaving headship. It was by no means the only one, but I eventually found what amounted to living a lie intolerable. I don't think such overtly Christian schools are really equipped to serve the whole community in modern Britain. I don't think they encourage the autonomy of children's development or help them to find their own spiritual pathways. I think the vast majority of parents, children, teachers and headteachers just want good, local, secular schools.

For me, church involvement was also a monumental waste of time – I felt I was collaborating in a system where thousands of children were being influenced by a powerful organisation. But while SIAMS inspections are still happening, headteachers will continue to play the game, as they feel their careers are dependent on a positive outcome. And the church's sway over schools and their children's learning will remain.