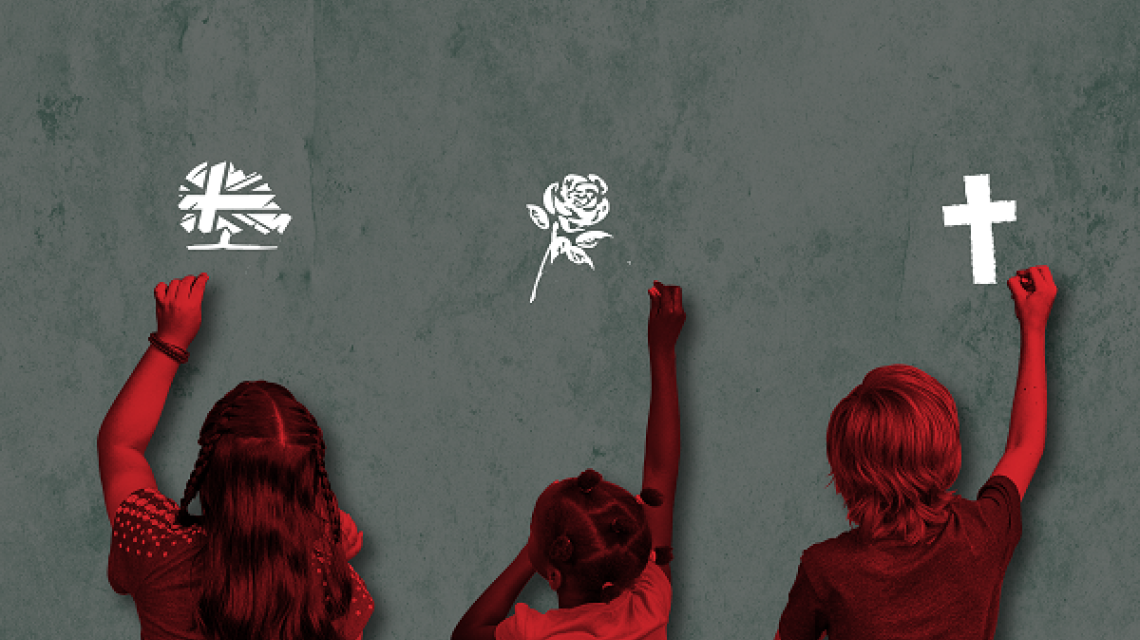 Schools are forbidden from promoting, showing favouritism to or discriminating on the grounds of partisan politics. Alastair Lichten asks why partisan religious beliefs are treated so differently.

Sections 406 and 407 of the Education Act 1996 (applying to England and Wales) require schools not to promote partisan political views, and to treat political issues in a balanced way, and for staff not to direct partisan political activity in an any official capacity. The restrictions apply to academies through their funding agreements and even to independent schools through their standards. Even if they put up 100% of the costs, the Monster Raving Loony Party can't run a school that promotes their political beliefs.

Schools are very free to discuss political issues in a balanced age appropriate way. Schools can even promote political values that form the broad consensus in a free society: voting is good, being an informed citizen is a good idea, and people have human rights and responsibilities.

There can be occasional confusions over the law, there's surely occasional overzealousness and the occasional climate change denialist crank who thinks their views aren't being treated with balance because of all that partisan political scientific evidence. The law basically works well.

Compare this to how schools treat partisan religious beliefs. Our political beliefs inform to greater or lesser extents our identity, moral and philosophical outlook. They inform some friendships and transcend others. We recognise the inviolable right to political beliefs and the violable right to practice them. We have a strong societal interest in protecting freedom of political participation, and a history of abridging this freedom – sometimes to protect the rights of others and sometimes to protect powerful interests. We can never transcend our politics in an absolute sense, but we can aim to put politics aside to act on shared interests or in professional capacities.

Does anyone seriously suggest the lack of state-funded Conservative Comprehensives, Nationalist Nurseries or Socialist Secondaries is an affront to political freedom? Are there any Labour voters outraged their local school isn't able to favour their children over those of their Lib Dem neighbours?

Imagine the outrage from Conservative voting parents if their children had to participate in a daily act of political worship of JC. Imagine how Labour voting families would feel if their school's headteacher and politics teacher and half the governing body were selected by the UK Independence Party. Would they feel their parental rights were respected?

The tension over 406/7 is particularly high when religious views inform partisan religious ones. For example in 2012 the Catholic Education Service was busy campaigning against marriage equality. Its efforts included assemblies encouraging their pupils to sign a national petition. Following complaints by the NSS, the DfE investigated. But Catholic schools preach against same-sex marriage in religious education and sex education and while the DfE supports their right to teach both subjects in accordance with their religious ethos.

Some Catholic schools specifically teach against secularism in SRE – secularism is a political position but the opposition is framed in religious terms. Is this partisan political or religious inculcation?

Meanwhile NSS research into compulsory religious dress codes in schools incidentally found state-funded Jewish schools promoting a "pro-Zionist vision of Israel", and "identification" and "strong identity" with the state of Israel. "Zionism" is certainly a contested political term encompassing everything from cultural ideas around identity and belonging to religious ideas and a range of partisan political stances.

So what would happen if the law treated the promotion of partisan religious and political activity equally?

This article was also posted on the National Secular Society website.