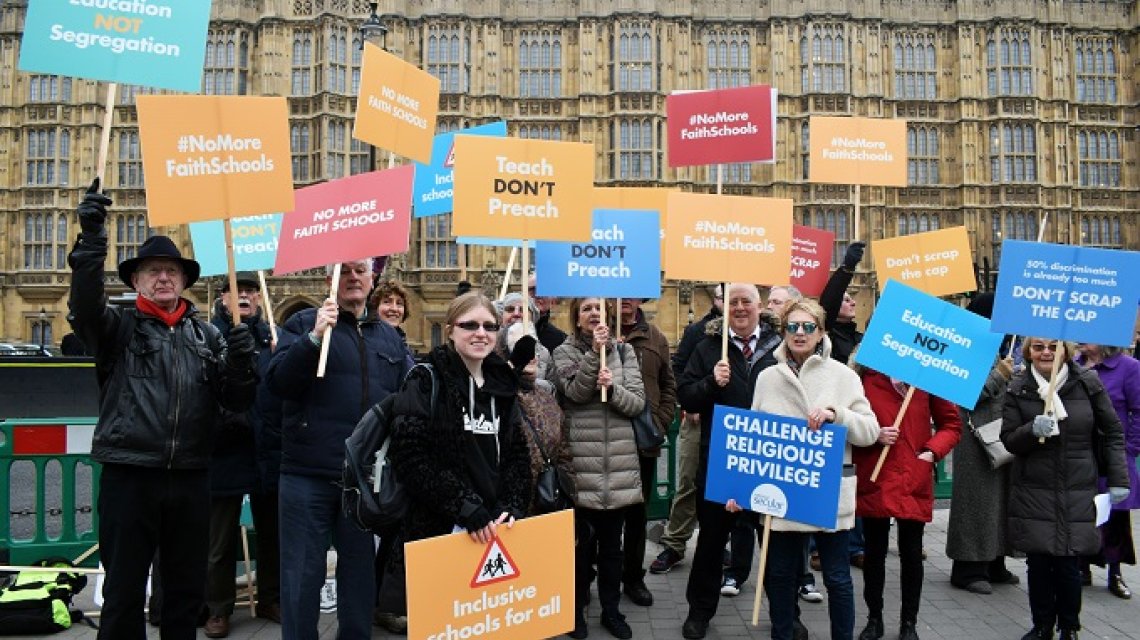 We can mitigate the harm caused by faith schools in plenty of ways. But Alastair Lichten says the long-term battle is over the fact faith groups run schools at all.

I spent a lot of Friday reading though a fraction of the first comments on the national No More Faith Schools petition. Some people are opposed to faith schools because they oppose religion, but most people's opposition comes from concern for genuine freedom of belief. Some people oppose faith schools from experience, some from principle and many from both. The stories people have begun to share through this campaign show who we are speaking for.

There are many organisations and alliances working to reduce the harm of faith schools. Of course there are also the ordinary staff getting on with their jobs in faith schools, keeping the religious ethos to a minimum and just focusing on their pupils. It's easy to see the strategic value in focusing on discrimination in admissions. It's easy to see that LGBT+ and reproductive rights groups might want to avoid criticising faith schools directly because it would make it harder for them to improve SRE in all schools.

Some people feel that focusing on specific harms, but not directly attacking faith schools makes it easier to build alliances with people of all faiths. But No More Faith Schools is about reaching out to everyone on the basis of fairness and equality. It's reductionist and absurd to assume that because someone identifies with a religion that they want schools to be organised around that religion.

As education and schools officer at the NSS, my casework focuses on helping parents, teachers and pupils mitigate the harm of faith schools. And on the policy side it is clear that any path towards ending faith schools will be gradual. This makes it more, not less, important to speak for the ordinary people who just feel that state schools shouldn't be used to promote religion.

As long as you have faith schools, people are going to question why they can't select pupils based on faith. If a school has a religious ethos, why can't it promote that ethos? What's the point of faith schools if they can't use RE to promote faith? How can a school have a relationship with a religious authority if that authority can't have a say in running the school? How can you have faith schools for the Church of England, but not for the Churches of Latter Day Saints, Scientology or the Flying Spaghetti Monster?

Not all faith schools are equally harmful. Traditionally CofE faith schools were seen as lighter touch, but as long as the church has a role in managing and inspecting these schools they will be pressuring them to promote a more rigorous religious ethos.

Let's say we changed all faith schools into voluntary controlled (VC) schools – where confessional RE is theoretically limited by the locally agreed syllabus and where only one fifth of potential teachers and governors (and hardly any pupils) are subject to religious discrimination. We would certainly reduce their harm. But that would still legitimise building public education around religious identities.

We could go further. Let's say we got rid of all discrimination in admissions. That might be better for people like Darren in Liverpool, who lives next door to a school his son can't attend because he believes in the 'wrong' religion. But what about the family of atheists in Yelverton who have to send both their children to faith schools because they are the only option? What about the 18,000 families last year that got assigned faith schools against their preference? What about minority faith schools that are undersubscribed leading to families not of that faith being pushed into them?

Let's say we made all faith school hiring subject to the Equality Act. Without the automatic right to reserve places for teachers of the faith at schools it would end some of the discrimination our petitioner Joseph saw when he was the chair of governors at a faith school. But faith schools would go on to create positions with 'genuine occupational requirements' to keep people of the 'correct' faith in key positions. Frankie, a teacher at a Catholic school, would still feel "singled out, berated and humiliated by more than one teacher" because she's not religious.

Let's say we had strong guidance on Sex and Relationship Education, so that faith schools couldn't use it to promote their religious views? That might help Catherine and the other LGBTQ young people who told us about being taught their sexuality was wrong. But what message does it send to young people when state funded schools need to be reminded not to condemn them?

Let's say we got rid of all compulsory worship in faith schools. That would have helped Philippa from London, who remembers being forced to pray at school, or Roman, who told us this morning about receiving detentions because his religious beliefs don't allow him to take part in worship. But how 'voluntary' is any worship when endorsed by the authority of the school, and those who don't take part face being singled out? What would it do to when faith schools bring in the local vicar to proselytise in assemblies?

The campaign for No More Faith Schools won't achieve victory overnight. There will be compromised half victories along the way. But we need to be clear what we are aiming for and we need to show it's a positive vision to unite around, not obfuscate. As I've said time and again, the most pernicious myth we need to bust is that faith schools are inevitable. If we take action together, change is possible!