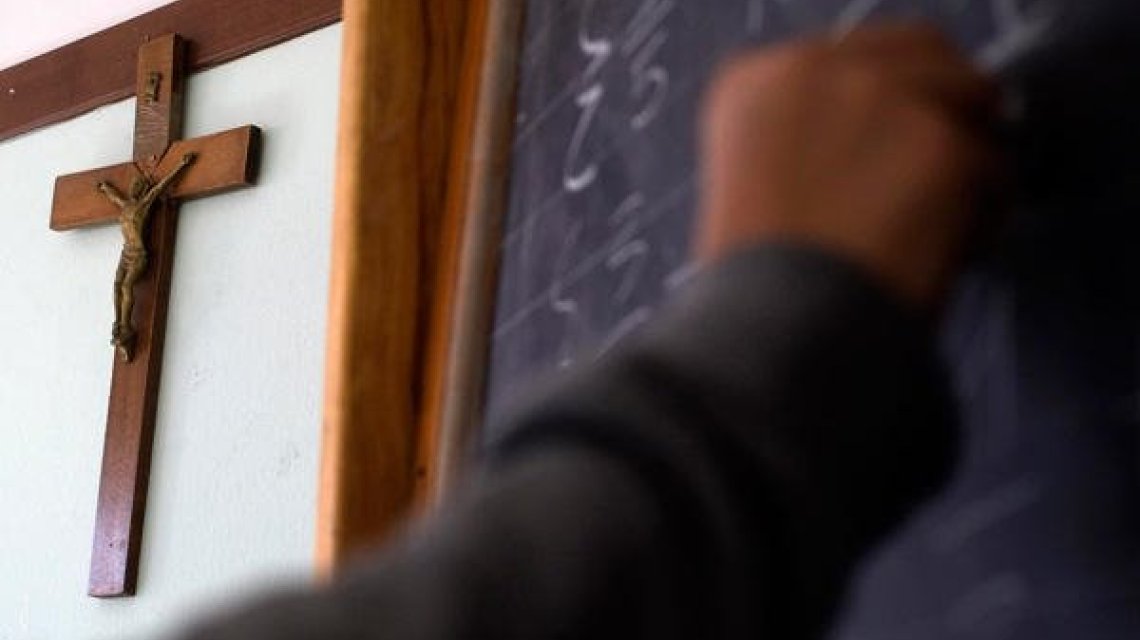 As a Catholic school in Scotland says it would refuse to call a non-Catholic its 'headteacher', Alastair Lichten says organising schools around religion makes discrimination which should be unacceptable seem normal.

We regularly hear from teachers who have been discriminated against by state funded schools because they have the 'wrong' (or no) religion. While religious discrimination in admissions by UK faith schools is well understood, similar discrimination in staffing gets much less coverage.

This passive acceptance risks the normalisation of what would not be tolerated in any other area of public life. One of the few times that this generates newspaper coverage is when schools are caught having to advertise for the same job time and again. With religious observance in the UK in terminal decline, limiting jobs to people of specific faiths inevitably leads to a smaller pool of candidates.

St Martin's RC Primary School in East Lothian is the latest example. After three failed attempts to recruit a Catholic headteacher (during which it has been without a permanent head), it is making a fourth attempt. It will also allow non-Catholics to apply for a new role as 'leader of learning' – a role with the same responsibilities as a headteacher but a less prestigious title. The absurdity of this, if not the injustice, should be enough to draw attention.

Even if the school wishes to appoint a non-Catholic as 'leader of learning', that decision (like any appointment to a state funded Catholic school in Scotland) is still subject to the arbitrary veto of the bishop.

According to the Daily Record, a spokesperson for the teaching union EIS (Educational Institute of Scotland) said: "We are clear that all teachers should be treated fairly when applying for any post and that all appointments must comply with current legislation, including all relevant equality legislation." And that "the key issue for any post is not the title, but the remit".

You'd think that a trade union would be shouting from the rooftops when its members might be facing religious discrimination, not conniving to downplay it. The widespread discrimination against non-Catholics in Scottish schools means EIS members aren't "treated fairly". Every teaching union in the UK should be fighting to end the exemptions from equalities legislation which allow such discrimination.

A few weeks ago we shared Rachel's testimonial. Rachel was a passionate religious education teacher who was shocked to be blocked from applying for a job at a state school in England because she wasn't Catholic.

The article was shared in an RE teachers' forum and the responses were surprising. By far the most common experiences of discrimination was from Catholic state schools, though others had experienced discrimination by C of E faith schools, including for "being the wrong type of Christian" and "wrong version of Protestant" etc.

One teacher was "trumped" by a Christian applicant to teach at a C of E faith school, because she was Muslim. Another described a Muslim colleague being summarily refused an application to an RE position at a Catholic state school because of her religion.

An experienced head of an RE department shared how they were told they "could not apply for a head of RS post as they were not Catholic". Another described the "limiting" of not being able to progress in her department because higher posts are preserved for Catholics.

Of course, other RE teachers leapt to obfuscate and defend such discrimination, telling Rachel to "do your research" or that she should never have expected to be able to apply to a local state school because "the role of an RE teacher in a Roman Catholic school is mostly to continue the religious nurture of children through the week". One temporary RE teacher thought it was perfectly "fair" that they couldn't apply for the post full time because they aren't Catholic.

Such obfuscation is necessary because discrimination isn't popular. Come to that, faith schools aren't popular. There isn't a great clamour of parents and teachers demanding schools organised around religion. Time after time when asked, the public would prefer not to have faith schools. Faith school advocates' only hope is that people will put up with faith schools because they seem like an inevitable, normal part of our education landscape.