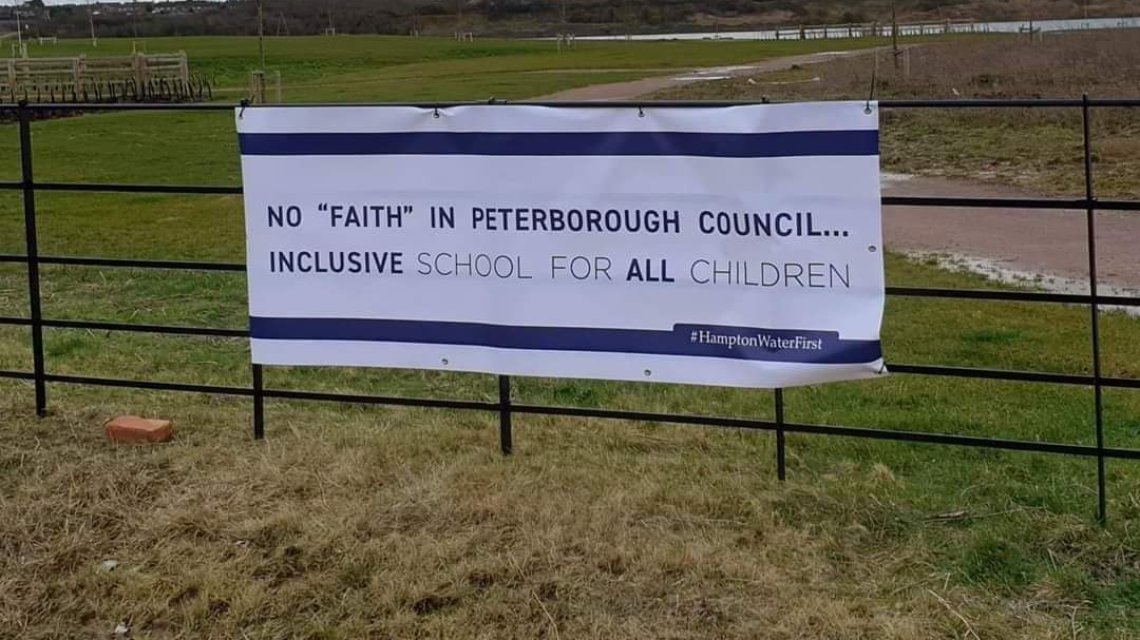 Residents of a housing development in Peterborough have expressed dismay at the implications of plans to open a discriminatory, state-funded Catholic school in the area.

Hundreds of people have been moving in to new homes in Hampton Water, only to find that many families are likely to be denied places at the school.

The primary school, which is set to open in 2022, will have voluntary aided (VA) status. It will be allowed to select 80% of its pupils on a religious basis in its first year, and could potentially select up to 100% on that basis after that.

The final proposal to open the new school says "the Catholic ethos will permeate all areas of the curriculum and underpin the school's work and objectives".

It adds that it is "essential that the Catholic character of the school's education be fully supported by all families in the school".

VA schools have sweeping powers to enforce a religious ethos, including by practising religious discrimination if they are oversubscribed.

Local activists have told the No More Faith Schools campaign that anger has grown as new residents have learnt they may not be able to access the local school.

Tracy Butler, a local resident who opposes the plan, said: "As Hampton Water grows, so does the anger as parents find out the local school will be a selective school. We need an inclusive school which the whole community can support."

She added that she felt her concerns had been ignored throughout the process of approving the plan to open the school.

Residents who have signed a NMFS campaign petition on the subject, and who have responded to the issue on a local Facebook group, have raised various objections.

One signatory to the petition wrote: "It is ridiculous to create a local school that can prioritise children out of area based on faith, when a clear desperate local need exists."

Some have said the discriminatory Catholic school will undermine the cohesion of the community and affect their children's friendships with other local children.

One Facebook commenter wrote: "I cannot see how this segregation is allowed, still encouraged, by people within modern society."

Others expressed concerns about having to travel to take children to school and being offered an unsuitable school place during a current round of applications.

And one petition signatory described Peterborough City Council's decision to approve the school earlier this year as "a slap in the face for democracy", given the opposition among local people and the lack of adequate reasoning for overriding it.

During a council consultation over its plans a year ago, 127 people in the local postcode disagreed with the decision to open the school, with just 17 agreeing.

A significant number of local residents also voiced their opposition to the plans in comments to the NMFS campaign at the time.

There is significant pressure on school places in Hampton Water. Earlier this month the Peterborough Telegraph reported that the city council was planning to require housing developers to provide more local school places.

In 2018, 100 children were reportedly on a waiting list to attend one of the existing schools in Hampton Water.

"Local residents are being forced to pay for a school that will be closed to their children, creating needless division.

"Throughout this process the Catholic Church's desire to open a faith school has trumped the needs and aspirations of a growing and diverse community. People in Hampton Water should have an inclusive new school that's open to everyone."

The NMFS campaign supports local residents to challenge new faith schools, particularly where they have discriminatory admissions rules and where there are proposals for inclusive alternatives.

How the school was approved

The government and the council approved the plan to open the school despite an alternative proposal to open an inclusive academy with a community ethos on the same site.

The Department for Education approved the plans in principle last year. The council gave the go-ahead in January and rejected a challenge to its decision the following month.

The NMFS campaign has vigorously opposed plans to open the discriminatory Catholic school throughout the process.

It is set to be the first state-funded Catholic school to open in England for a decade.